Cotton and Sisal are the main fibre crops grown in Kenya. Both are drought tolerant crops grown in the Arid and semi-Arid lands(ASALs) and have the potential to reduce poverty, food insecurity and unemployment.  Many Kenyans benefit from the fibre crop directly as processors, traders, transporters and input suppliers.

History of sisal in Kenya

Sisal growing and processing industry in Kenya can be traced back to 1914, when the first sisal growing firm was established in Thika. The industry grew by leaps and bounds in the first 50 years characterized by a rapid increase in acreage and quantity of sisal exported. The increase in sisal production led to the establishment of a spinning factory in Juja and a sisal research station in Thika.

The invention of cheaper synthetic fibers in the 1940’s, can be marked as a major drawback for the world sisal production, since, it led to reduced sisal demand. However, demand for sisal globally has increased tremendously since 1990’s with the global aware of use of sisal in environmental conservation as well as increased utilization of sisal fibre in building and construction industries in West African and Middle East countries

Sisal is mainly grown as a plantation crop with the estates producing over 80% of the total production. There are ten sisal plantations with an area of 24,583 (Ha) in 2019.

Smallholder sisal is mostly grown as a boundary crop and along contours as hedge rows for soil conservation. Most of it is not grown for harvesting. However, as a result of improved incomes from the crop, farmers have started planting it as a stand-alone crop in their farms. Area under this crop is estimated at 2,500 acres.

Over 90 % of sisal produced in Kenya is exported to various destinations in the world and the rest is sold to the local cordage and cottage industries.

Sisal is grown in areas that have high prevalence of poverty. It is an important source of income generation and employment creation.

In 2019 sisal contributed Ksh 3.72 billion to the Kenyan economy

Kenya is the third highest producer of sisal in the world after Brazil and Tanzania. 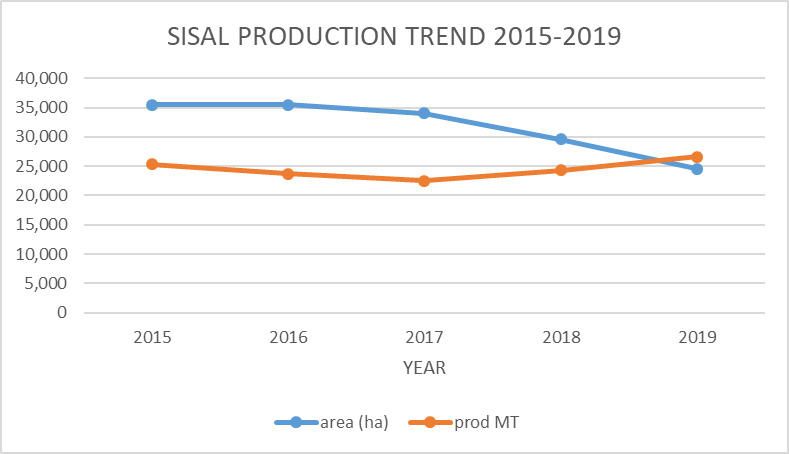 Cotton cultivation in Kenya started in 1902 coinciding with the construction of the Kenya-Uganda railway At independence in 1963, it had become established as a cash crop in Western, Nyanza, Central, Eastern and Coast Provinces.  Cotton was later introduced in the Rift Valley Province, in the Kerio Valley in 1974.

In the mid 1980’s Kenya was a major East African producer of cotton for local consumption and export. At the peak of its performance 1984/1985, country produced 13,000 tonnes lint (70,000 bales). In 2019, the country produced 9,677 bales against a potential of up to 385,000 bales under rain fed conditions and 35,000 bales under irrigation. The industry has the potential to directly or indirectly employ 10 million people.

The cotton textile industry in Kenya has been threatened since liberalization of the sector in the early 1990’s.  The Government recognizes the pivotal role that the industry would play in the revitalization of Agriculture and in the realization of the country Vision 2030 that aims at making Kenya a newly industrializing, middle income country providing high quality life for all its citizens by the year 2030”.
Cotton is currently grown mainly by small- scale farmers in 24 Counties of Kenya
Under the big 4 Government agenda, cotton and textiles have been identified among the key drivers towards expansion of the manufacturing sector. 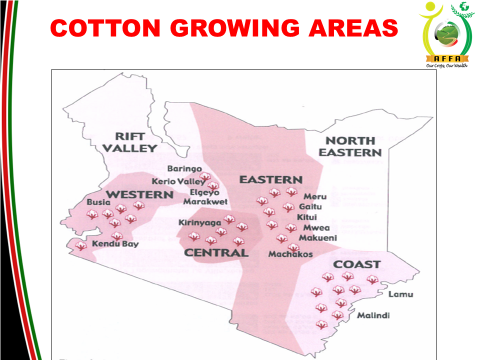 Cotton is grown in small-holder farms in the following Counties: 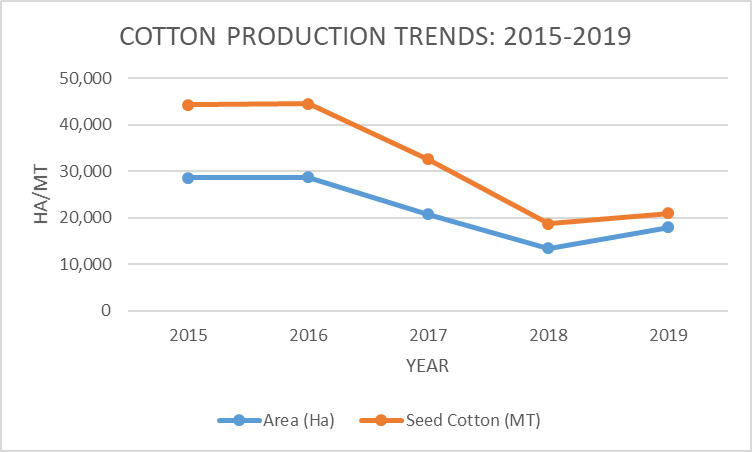 An estimated 40,000 small-scale farmers grow cotton in Kenya. In the last 5 years, the acreage under cotton ranged between 21,000 to 29,000 hectares spread in 24 cotton-growing counties.  In 1984/85 , the cotton/textile sector was employing 200,000 people accounting for 30% employment in manufacturing sector.  Currently the country produces about 29,000 bales per annum but has the potential to produce upto 420,000 bales for both rain fed and under irrigation. 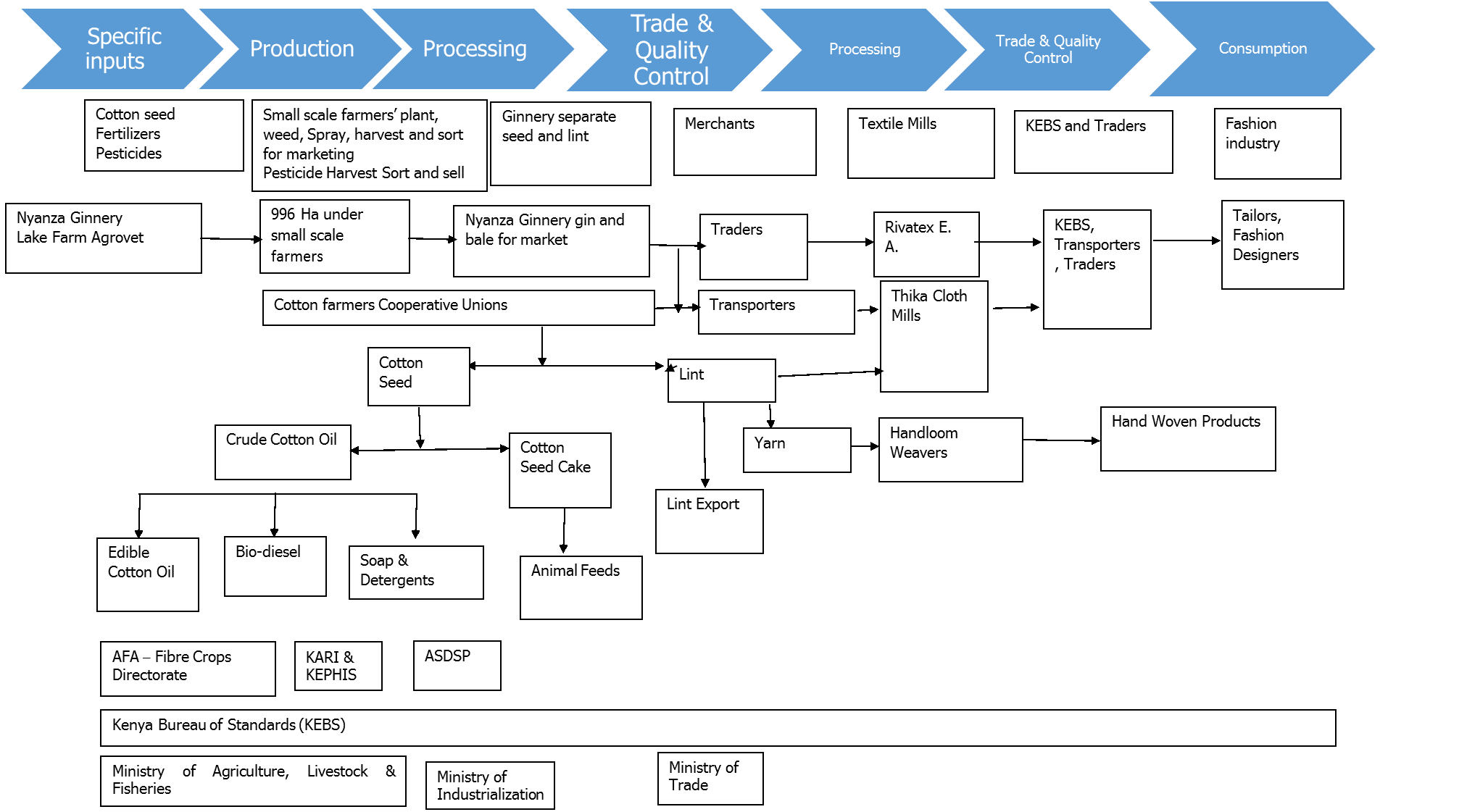